There are so many pictures that we have taken of these countries. Just things that you won’t see at home. But that goes for anyplace. Since I’ve been at the Serengeti we’ve seen so many wild animals, but if it appears on National Geographic TV your going to spend alot of idle time waiting for the perfect picture.

Whereas we have a day, maybe 2 to see the crossing of the Maasai Mara river of the wildebeests. A couple that we met spent one whole day waiting for the wildebeests to crocs.

All the animals are in herds, all it takes is for one to start crossing and then it becomes almost like a stampede their all going. Their wary after making these crossing numerous times that there is a danger in the river.

I think I read or heard that the crocodile only needs to eat two full meals a year to survive successful. They’re not the most successful hunter. They know that the herds will be crossing the river twice a year to follow the rains. Daniel (our driver) and I were joking that they need a volunteer to go first. This is life. 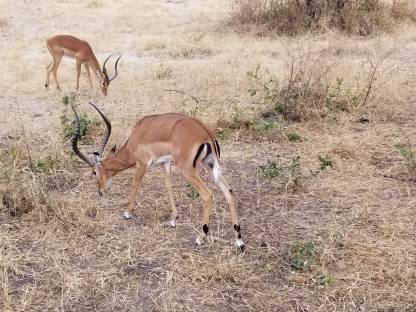 They just need someone to go first, the herds could stand around all day and go the next day. Jeanette and I saw 3 crossing in one day.

Jeanette and I saw 3 crossing in one day.

They’ve crossed, but some are still struggling to find a way up the embankment. Crocodiles lying and basking in the sun on the banks of the Mara River.

A tour group having a “Busch lunch.” Just a spread apron out on the hood, and pass out the box lunches that were prepared earlier this morning. 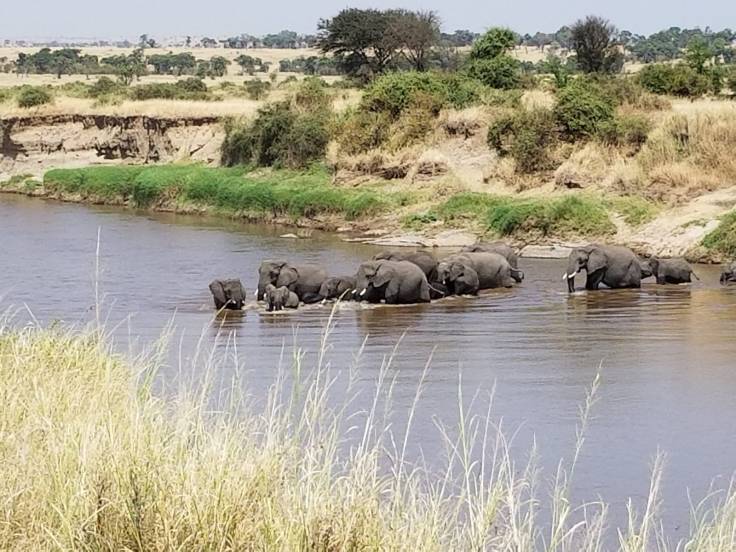 A herd of elephants crossing the Mara River from the opposite side, along with 2 babies. Water was too deep for them. Had help from adult females. 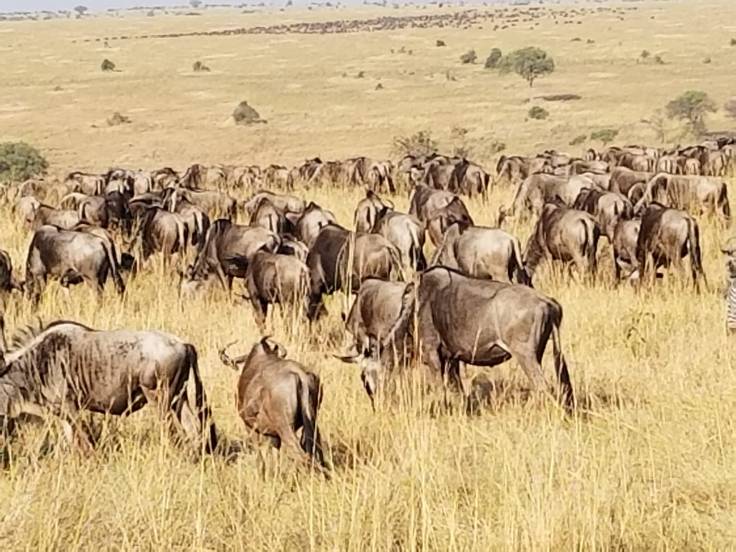 Just herds of wildebeests…more in the background.

This wildebeest is caught… right hind leg by a crocodile It would get to the edge only to be pulled back into the water. Was and on going struggle for about 15 minutes, till we got another call over the squawk box of another crossing.

Their are only so many place you can park and actually see a crossing. Daniel I think is practicing to be an off-road racer. What a kick!! He told us that the crocodile will win most of the time. If not the wildebeests and zebras will be so injured that other predators will get them.

I’m trying to watch and my samsung android keeps floating up and down on me. And I refuse to carry one of these humungous cameras. That’s not me. (Video coming soon on Facebook)

NASCAR driving in the Serengeti

You very got to see the Mara River crossing. When we booked about a month earlier we thought we would see the Grumeti River crossing. Time we got there they had already crossed and were further north. You just can’t tell where their going to be!!

One last thing about Daniel’s driving. We’re sitting in the vehicle having our box lunch… wherever you could find shade. I’m about halfway thru and holding my little box fruit drink and the squawk box says something.

You could hear the other vehicles start, and the race is on. I think I told a high school friend Dennis Nizzi it’s like the last two laps of a NASCAR race. Anything goes, were flying, I’m trying to not spill and pack my box lunch.

I swear I left my seat (nobody wears seatbelts because your up and down so much) came down and my hat came down later. Craziest ride, like a Disney ride.

One of the herds of wildebeests crossing the Mara River.

This is just amazing to see in person. It’s exactly how you see it on National Geographic. We feel very lucky to have witnessed 3 different crossings in one day.

One thought on “Three Crossings In One Day!”