Entering the Serengeti Game Preserve. Can you actually believe it…we got off the ground Lol

Our first hyena, we were all excited. The Serengeti looks alot like the background behind the trees that the monkeys are playing in. Camping out, and when we pulled in we were met by zebras roaming throughout our tents. 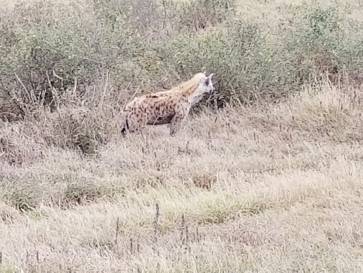 Leaving early in the morning 6am wake-up and they will bring you hot water for your shower. One or two buckets. Shower is attached to your tent. The pull chain will allow water to flow on you or pull the chain to stop it. Except our didn’t work. Water just flowed thru. It worked out OK. Just be quick! 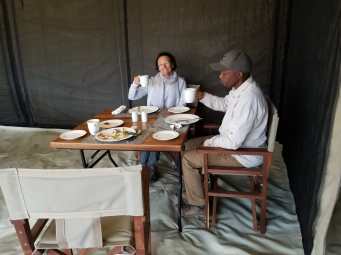 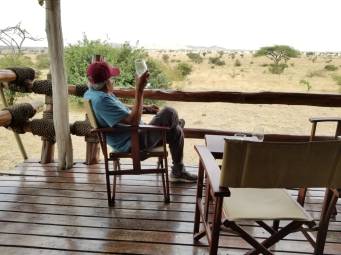 Jeanette and I are sitting outside waiting for the sunset, having a refresment and up walks a helper with my favorite snack…popcorn.

Made my day. Had lunch today about 50 yards from a pool of hippos. Probably about a hundred of them in the water. Plus one dead one and about 3-5 crocodiles sun bathing themselves. The crocodiles can’t get to the dead hippo, the hippos are in the way and the predators can’t get down the steep embankment. 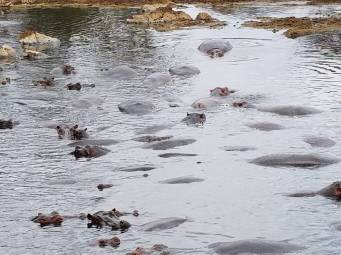 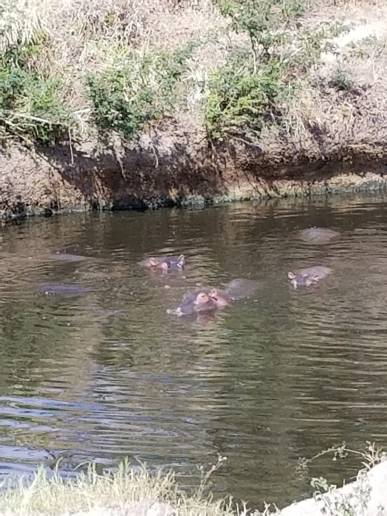 Got our first glimpse of a Cape Buffalo

On a one hour driving tour at night. Took a picture out the window of all the rocks that we’re driving over to get to our lodge. The craziest roads. A couple of the really deluxe places we got to stay and dine at. 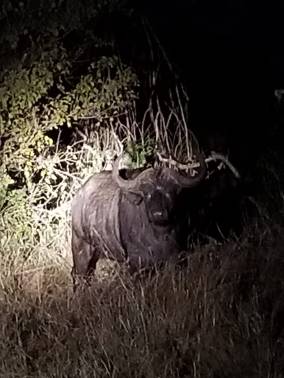 When we stayed at the tents inside of the game preserves we had to signal the security guys to walk us to our rooms at night. They carried rifles.

Thought we were going to have a Mexican standoff, there for awhile lol.

One morning were out looking for the rhinos, had already seen 3 females lions lying under a tree but not a male lion. Drivers have these squawk boxes by their head, so when something is sighted they head over there if there close enough.

Anyway went over to where a cheetah had killed a gazelle. The gazelle was about 30 feet off the road and the cheetah was lying nearby. A cheetah expends so much energy getting a kill, it has to rest for awhile before it can eat. He starts eating, and soon he see the vultures, he takes off running. He knows that other predators are going to follow the vultures.

Could be hyenas, or a lion, our guide tells us. Soon a hyena is on the far side of our vehicle and circling around the front and soon he is directly out from the gazelle. The vultures fly in 10-12 plus of them and start pecking at the gazelle. The hyena comes running in, the vultures scatter. The hyena looks around for and instant grabs the gazelle and takes off running with it! 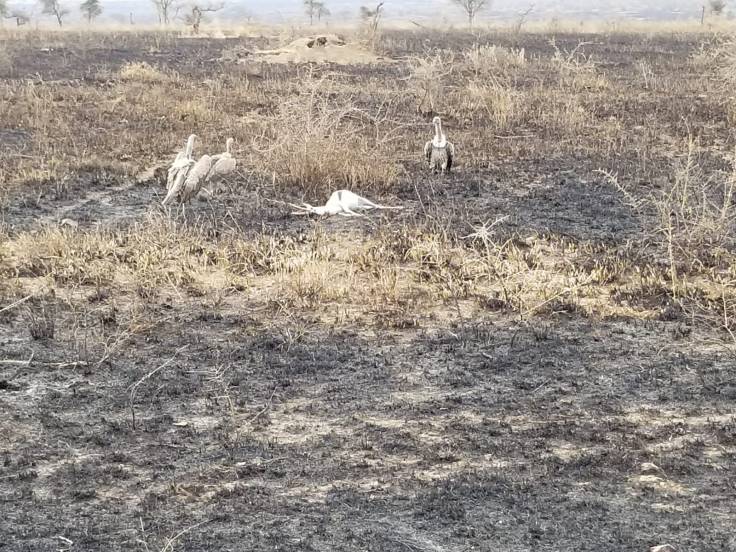 Runs about 50 yards and start tearing the kill apart. The vultures are still looking around for the kill, asking themselves, hey what happened, where did it go!! Hyena is tearing it up. They don’t share.