A little late telling about our New Years celebration. Day started with us taking a ride on a giant ferris wheel, it takes 30 minutes to complete its cycle. The whole city and outline areas you can see. If you have ever ridden in a cable car, I think this is what these are. You can have a complete dinner served.

Our car must of had 12 people in it at least. Stand up walk around or sit. Pretty neat. Had talked to a few people as to where would be a good place to stand for the fireworks display. As we left the ferris wheel we walked over the bridge where I thought it would be a cool place to stand got a couple choices.

You Have To Try The Chili Crab

Jeanette has commented about our experiences with hotels, tour services and food (don’t think we have eaten out yet at a place that she didn’t truly enjoy what she had), it was a delicious dinner. A little bit out of our budget, but we had been told about this area and you only get to go around once. Enjoy it, and we did.

Singing In The Rain – Or At Least Waiting In the Rain

Absolutely no way your getting thru that human wave of people, plus it’s sprinkling a little hardner now. Made our way to the waters edge which was probably 10 feet wide, since all the eating/drinking establishments along the boardwalk were fenced in and were fenced out. Reservations only.

Couldn’t even order a beer. We’re standing 3 deep from the edge of the water with (almost) three hours till New Years. The people sitting on the ground(1st row) had been there since 7p, a young German couple had been sitting since a little after 8p. And their covering themselves with their umbrellas. Conversation with the young German couple was interesting 7 weeks vacation. Traveling all over.

All the while tons of people are walking different directions behind us. Just had to find find a spot and wait. The rain would come and go. Wasn’t a cold rain, just a wet one with everyone holding an umbrella all within a 6 ft walking space. The sitting and standing have the other 4-5 ft.

The Moment Is Getting Near

After almost 3 hrs. of standing (in the sprinkle and rain) the moment is getting near. They had two previous fireworks display that lasted about 1 minute each. Pretty good. The laser/water show was was good also. The laser show came from the top of the Marina Bay Sands Hotel. If you have an extra $400 p/night you can stay there.

Absolutely a beautiful hotel, which just happens to have a boat (on top) connecting all three hotels. Went to the very top (where the boat is) for a drink. Was told that there is a $48 cover charge p/person that doesn’t include a drink just to enter the bar. Had to pass, even though we got to look over the edge.

Once the count down started I had already warned Jeanette people would start jocking for position. We had already got a front row (for Jeanette and umbrellas were up…its raining) I kinda got in beside her and there were phones above, beside my head all recording the fireworks.

I think we were in an excellent spot. (On a football field I would say we were on the 45 yard line). Overall on a scale of 1 thru 10 for the display I would of given it a 6. It was raining pretty good and a lot of low fireworks (skimming the water)….never seen that before, explosions everywhere that left a lot of smoke so you couldn’t really see some of the higher explosions.

Once we got into one of the eateries, all was forgiven. Had a couple drinks and started walking “home.” All streets blocked, with a minimum of 3 police with sometimes 7. We had to go a certain way that was blocked, talked our way thru about 4-5 blockades.

1st blockade would let Jeanette and I thru, when we got to the 2nd one they would tell us “no you can’t go this way.” We would tell him “so and so” said it was OK. They all gave us permission to pass.

We wished them all a Happy New Year and they wished us one back. I was 75% soaked and Jeanette’s upper body was dry and lower…including shoes was drenched. Saw people with no umbrella at all. Like I’ve mentioned to a few people this is one New Years I’ll never forget. In Singapore 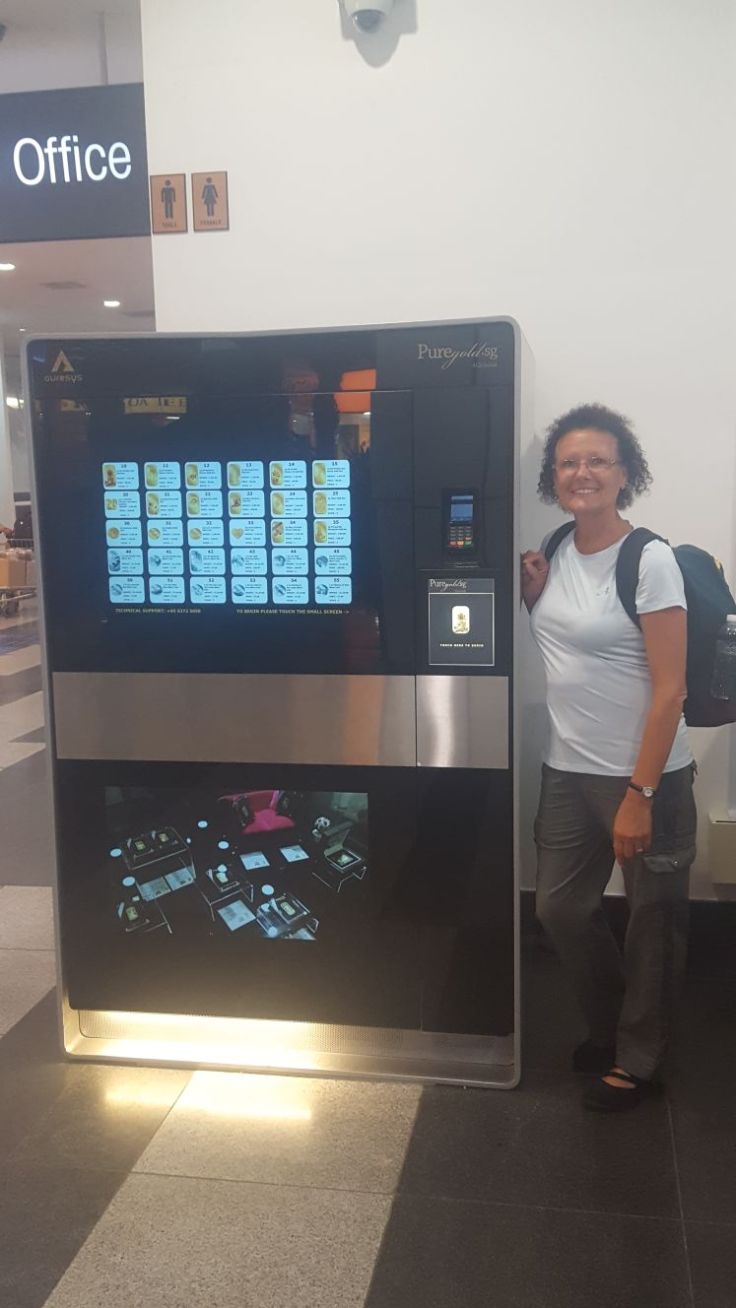 Here’s Jeanette trying to figure out how to get this “little” piece of machinery past customs. It’s filled with small pieces of gold (of different weights) that you can purchase right out of the machine at the Harbor Front mall as we were getting ready to depart Signapor e for Kuala Lumpur, Malaysia.